Our 2023 Speaker Series focuses on how we will shift from surviving the COVID-19 pandemic to thriving. We have woven together programming that shows how climate change, mass incarceration, drugs, economic opportunity and racial justice are all interconnected and deeply impact community health. And, beyond the policy, how we might create lasting narrative and policy change in these areas. In the face of an uncertain budget and political landscape, it’s critical that our collective action is intersectional and lasting.

Cultivation of the Heart: Centering Hope for Youth Engaged in Gun Violence

Julius Thibodeaux-Hasan (author and director of Movement 4 Life) and Scott Budnick (founder of the Anti-Recidivism Coalition and CEO of 1Community) will join Chet P. Hewitt and our guests to reflect on the urgency of reforming the carceral system, the power of centering people with lived experience in finding solutions and the hope we must have for our youth.

Julius’ memoir, Cultivation of the Heart, is about his path and how we can cultivate the hearts of our young people, especially those at the center of gun violence who are grappling with hurt and pain. 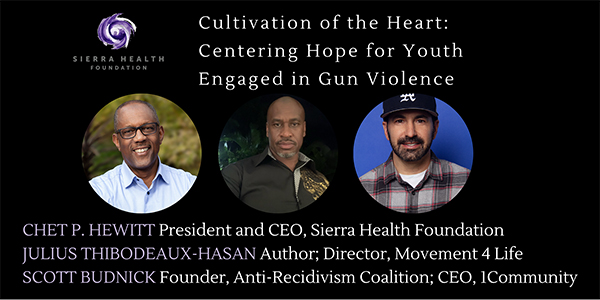 Countdown to Census 2020
Cuenta Conmigo / Count On Me 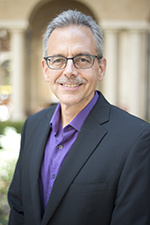 This timely Speaker Series program focused on the importance of full and fair San Joaquin Valley participation in Census 2020 and the role we each can play to include, support and protect everyone across the San Joaquin Valley to be counted.

We were pleased to welcome guest speaker Manuel Pastor, distinguished professor at University of Southern California and Director of USC’s Program for Environmental and Regional Equity and Center for the Study of Immigrant Integration. Professor Pastor provided an overview of the economic, social and environmental influence of the census as a responsibility of and to the people — to be seen, counted and valued as individuals who make contributions to their community, to the state and to the country. He was joined by Dolores Huerta, civil rights advocate and president of the Dolores Huerta Foundation, for a conversation on the power of advocacy to ensure all are reached. A panel discussion followed with Pablo Rodriguez of Communities for a New California Education Fund, Deep Singh of Jakara Movement and Pastor Trena Turner of Faith in the Valley. Speakers and community members engaged in robust discussion about the courage required to be seen, heard and counted.

A Policy Conversation on
Family Caregiving for Older Adults 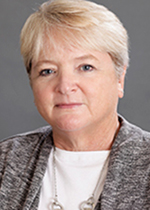 Kathleen Kelly, M.P.A., Executive Director of the Family Caregiver Alliance, joined us for our third Speaker Series program focusing on California’s rapidly growing and increasingly diverse older adult population. Ms. Kelly provided an overview of policy opportunities and system reforms based on her extensive national experience and her participation on the California Task Force on Family Caregiving. 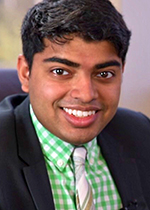 Social entrepreneur, biomedical researcher and Alzheimer’s advocate Nihal Satyadev provided a millennial perspective on caregiving. Noticing a lack of youth advocacy for Alzheimer’s disease, he founded The Youth Movement Against Alzheimer’s, which provides opportunities for college and high school students to advocate, research and provide care for those battling the disease.

The Changing Portrait of California’s Older Adults: Implications for Housing and How We Live

Sierra Health Foundation and the California Commission on Aging co-sponsored this second Speaker Series event focused on California’s rapidly growing and increasingly diverse older adult population. Local and state leaders discussed the emerging older adult profile, with a focus on disparities by race/ethnicity, and what it means for housing.

Race, Racism and Otherness
A Conversation with john a. powell 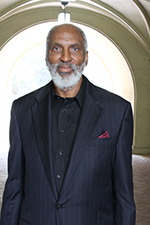 This discussion focused on solutions-based policy and advocacy approaches to systemic racism and othering. john was joined by a panel of diverse voices on the subjects of advocacy and social justice in the face of historical and modern displacement and marginalization — and opportunities for change. Sierra Health Foundation President and CEO Chet P. Hewitt moderated the panel, which included Morning Star Gali, the Director of Native Justice Now; Nicholas Hatten, Executive Director of San Joaquin Pride Center; and Virginia Knowlton Marcus, Director of Legal Advocacy at Disability Rights California.

powell is the Director of UC Berkeley’s Haas Institute for a Fair and Inclusive Society and is an internationally recognized author and expert in the areas of civil rights and civil liberties and a wide range of issues including race, structural racialization, ethnicity, housing, poverty and democracy.

Sierra Health Foundation, in partnership with eight philanthropic partners and AARP California, hosted this forum to explore the implications of California’s rapidly changing aging profile. Speakers included distinguished experts in demography, policy, legislation, planning and community development. The program addressed the social determinants of health and how disparities that racial and ethnic populations experience throughout their lifespan may impact their health, safety and living conditions. Participants discussed the Milken Institute’s report Best Cities for Successful Aging and emerging strategies for improving community livability.

News, Media and Politics: What is the New Normal?

This Speaker Series event focused on the intersections of justice, news and politics and the implications for policymakers and citizens, bringing together national, state and local leaders to discuss the new realities, responsibilities and understandings of media and truth. Panelists representing print, radio, TV, social media and academic perspectives discussed the role of media in informing residents and as a check on those in power, the power and responsibility of news sources to shape politics, and the role of trust in the public’s understanding of news and what constitutes news, media or the truth. Panelists included Linnea Edmeier, Managing Editor at Capital Public Radio; Trymaine Lee, national reporter and Pulitzer Prize-winning journalist with MSNBC/NBCNews; Thomas Peele, Pulitzer Prize-winning investigative journalist with Bay Area News Group and UC Berkeley School of Journalism lecturer; and Dyan Ruiz, co-founder of People Power Media.

We were pleased to welcome Larke Nahme Huang, Ph.D., Director of the Office of Behavioral Health Equity at the Substance Abuse and Mental Health Services Administration, U.S. Department of Health and Human Services. Providing leadership on national policy for youth behavioral health care, Dr. Huang works with states and communities to eliminate systemic disparities and create equitable access for all families.

Steve Phillips: Harnessing the Power of the New American Majority

Steve Phillips, author of Brown is the New White, joined us for this event to discuss how people of color and progressive whites add up to a new majority of voters and what this means for U.S. politics and policy. A national political leader, civil rights lawyer and senior fellow at the Center for American Progress, Mr. Phillips uses research and demographic data to challenge the political practice of chasing the white swing voter and ignoring communities of color, which now make up the political majority and have the numbers to bring issues of importance to the main political stage.

Mr. Phillips discussed disenfranchised voters, harnessing the power of this New American Majority, and how to best use that power to build coalitions and make real change. He was joined by a panel, including Kathay Feng of California Common Cause, Phillip Rodriguez of City Projects, and Mindy Romero of the California Civic Engagement Project at the UC Davis Center for Regional Change, to discuss subjects of civic engagement, barriers to voting, systems change and grassroots community building. Jose Hermocillo of APCO Worldwide, and a Sierra Health Foundation board member, moderated the panel.

Access the Harnessing the Power of the New American Majority video (YouTube.com).

Daniel Macallair: After the Doors Were Locked

We were honored to host a book launch for colleague Daniel Macallair, Executive Director and Co-founder of the Center on Juvenile and Criminal Justice. His book, After the Doors Were Locked: A History of Youth Corrections in California and the Origins of 21st Century Reform, looks at what history can teach about modern-day youth corrections reforms. Drawing from his nearly 30 years of experience and research, Mr. Macallair shares the compelling and incisive story about the nation’s largest youth corrections system and the daily reality of institutional life.

The event included a discussion with Mr. Macallair and Sierra Health Foundation President and CEO Chet Hewitt about the history of congregate institutions and the repeated efforts to reform the way youth were treated in those institutions. They also took part in a panel discussion, which included Samuel Nunez, Executive Director of Fathers & Families of San Joaquin, and juvenile justice advocate Ruben Mesta, who both shared their experiences in the juvenile justice system, as well as their suggestions for reform. Takarra Johnson from Sacramento Area Youth Speaks opened the event with a moving spoken word performance about the realities of juvenile justice.

Learn more about After the Doors Were Locked on the Center on Juvenile and Criminal Justice website (CJCJ.org).

A professor and chancellor’s fellow in the Department of Psychology and Social Behavior in the School of Ecology at the University of California, Irvine, Dr. Elizabeth Cauffman explained how cognitive and emotional maturation follow different developmental trajectories, and how risky behavior, including delinquency, can be seen as a consequence of the differing timetables of cognitive and emotional development. She also presented preliminary findings from her research studies entitled, Pathways and Crossroads, which examine the impact of the juvenile justice system on development and behavior.

Dr. John Rich: Trauma and Violence in the Lives of Young African-American Men

A professor at the Drexel University School of Public Health and a leader in the field of public health, Dr. Rich presented on trauma and violence in the lives of young African-American men. His presentation included stories of young people affected by adversity, violence and trauma. Participants learned about their experiences through powerful videos produced by young men and women who are part of Healing Hurt People, a program of Drexel’s Center for Nonviolence and Social Justice in the School of Public Health and College of Medicine. Through their stories, Dr. Rich suggested new ways to think about the connection between trauma, the social determinants of health and problems like urban violence. He also talked about the need to bring innovation to programs and policies by designing them with those most affected by violence. The event included well-received spoken word performances by two members of Sacramento Area Youth Speaks, Shomari “Issa” Jackson and Andreas “Dre-T” Tillman.

Access the Trauma and Violence in the Lives of Young African-American Men video (YouTube.com).

We welcomed inspiring filmmaker Erahm Christopher, who shared his experiences of using film and creativity to heal and empower youth. For many years, Erahm has worked with students to create the TEEN TRUTH educational film series, which has reached more than six million youth. Filmed by students, the series addresses topics such as bullying, body image and drugs, with teens speaking truthfully about their experiences. The films, which are shown at schools and other venues nationwide, are created to educate youth and adults about issues, but also to empower them to be the difference at their schools and in their communities. Learn more about Erahm and the film series on the TEEN TRUTH website (TeenTruth.net).